Read about the Editor Read about “the Photographer” 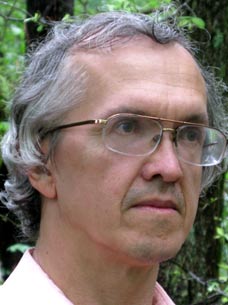 “ A resident of Siberia and a professional naturalist, Alexander has intimate first-hand knowledge of the plants, animals, birds, and butterflies of the Western Siberia. This is why his paintings of Anastasia's glade look so authentic, so alive.”

In 1971, on a lone walk through the Siberian forest, the 10-year-old Alex Razboinikov witnessed a miracle that gave direction to his entire life: a butterfly emerging from chrysalis, spreading wings, and taking flight. The boy watched it in amazement. Returning home, he took paints and brushes and made a watercolor of the butterfly he saw.

A year later, when he was barely 11, his watercolors were already being sent to the most-respected Moscow magazines and receiving enthusiastic response. By age 17, he was an accomplished entomologist and painter in his own right, and by age 21 was completing the first volume of his own encyclopedia of butterflies which he illustrated and lettered completely by hand – a masterful work with no rivals in the world, that took four years to complete.

Butterfly as symbol of human soul…

By that time he was aware of some striking similarities found in different epochs and traditions: in cultures the world over, butterflies have been seen as symbols of spiritual rebirth and human soul escaping the confines of the body.

Alexander delved into the world of ancient and modern civilizations and butterflies, exploring the connection between the human soul and the butterfly as seen in cultures as diverse as Ancient Greece, Rome, Egypt, India, Cambodia, Japan, Siberia, Aztecs, Mayans, Native Americans, Australian Aboriginals, Africa…

After devoting over a quarter century to this exploration, Alexander Razboinikov has produced what is probably the most extensive body of artwork on this topic that was ever created by man. Calling the butterfly "the Universal Soul", he has a breadth and depth of scientific knowledge and the penetrating artistic insight that may have no matches in the world today.

Alexander Razboinikov's great achievements range from one-of-a-kind hand-painted AND hand-lettered encyclopedia of butterflies of the Ural Mountains (of which only a single, 100% hand-made copy exists in the entire world!) to over a hundred of illustrated books, countless journals, and a myriad of paintings and sculptures in private collections in Europe and the US. Also a member of prestigious international artists' groups, he has had numerous personal exhibitions all over Russia and beyond.

Starting 2003 Alexander produced a series of paintings that featured on the first-edition covers of the Ringing Cedars books in English and which have since been used on the Dutch, Korean and Hebrew editions of the Series.

As a resident of Siberia and a professional naturalist, Alexander has intimate first-hand knowledge of the plants, animals, birds, and butterflies of the Western Siberia. This is why his paintings of Anastasia's glade look so authentic, so alive.

In fact, such was his penetration into Anastasia's world that in 2004 he created a painting on her link to the ancient culture of Arkaim – two full years before Vladimir Megré revealed such connection in his 2006 book The New Civilisation !!

All Alexander's works are done in one go, and due to the technique used, no "corrections" are possible! Some works are done completely free-hand, without first tracing any shapes with a pencil. Countless people around the world have appreciated his paintings for the light they emanate. The power coming from the original pieces is mesmerizing. Besides, having such fine detail executed in watercolor is totally extraordinary.

Alexander Razboinikov also enjoys a very special relationship with Mikhail Petrovich Shchetinin, the founder of the School revealed in Book 3 of the Ringing Cedars Series. He has designed a one-of-a-kind commemorative sword that was then hand-forged by some of Russia's finest craftsmen and presented as a gift to Mikhail Shchetinin as a "warrior of the spirit". Alexander subsequently spent considerable amount of time at the School, sharing his skills with the students and jointly co-creating some of the murals that ornate the School's walls.

Alexander lives in his home town of Chelyabinsk, Russia. He continues to paint and travel to exhibit his works, and occasionally makes some of his original pieces available for sale. He also accepts commissions. If you have any inquiries in this regard, please contact us and we will be happy to help.